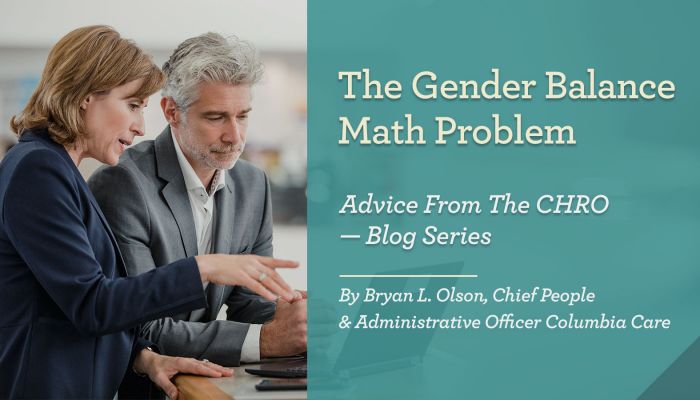 At most companies, there is gender-balance in entry-level hiring.

So, here’s the math problem: if roughly half of the candidate pools for leadership positions are comprised of women, but only 25% of the executive population are women, are companies choosing the best candidates for executive? The answer: statistically, probably not. There are a variety of reasons that this is happening, and a multi-pronged approach is necessary to address the issue. One important component of that approach should be involving men in the effort.  After all, they are 75% of the people making the decisions.

The Role of Men

One of the best first steps in getting men involved is to clearly articulate this math problem to male decision-makers. Though nearly all of us exercise implicit bias in our decision-making (unknowingly favoring those who look, think, and act like us), most strong leaders desire to promote the best and most talented candidates, regardless of what they do or do not have in common with those candidates. Often these leaders simply don’t consciously realize that their implicit bias, and the aggregation of a similar bias from the other decision-makers, is leading to the selection of leaders who may not be the strongest choice. Simply explaining the issue in mathematical terms can bring male allies to the cause of achieving gender-balance.

Once they are aware of the implicit bias in their decisions, male leaders can become engaged in the effort and make a significant difference by sponsoring women in their firms.  A sponsor is more than a mentor. A sponsor is someone who puts their political capital on the line to advocate for a talented woman whom they support. Multiple studies have found that people with sponsors are more likely to advance in their careers than those without sponsors, but that women are less likely to have sponsors.

Men alone are not the solution to this complex issue. However, it will certainly take a lot longer to address it without involving them. As Catalyst, one of the pioneers of striving for gender equality in the workplace, notes on their Website, “men are often untapped – yet critical – resources in diversity & inclusion efforts aimed at eliminating gender bias.”

My Take: How to Engage an Age-Diverse Workforce

A Road Map for Creating a Diverse and Inclusive Corporate Culture