Is It Time to Overlook Red Flags on Resumes? 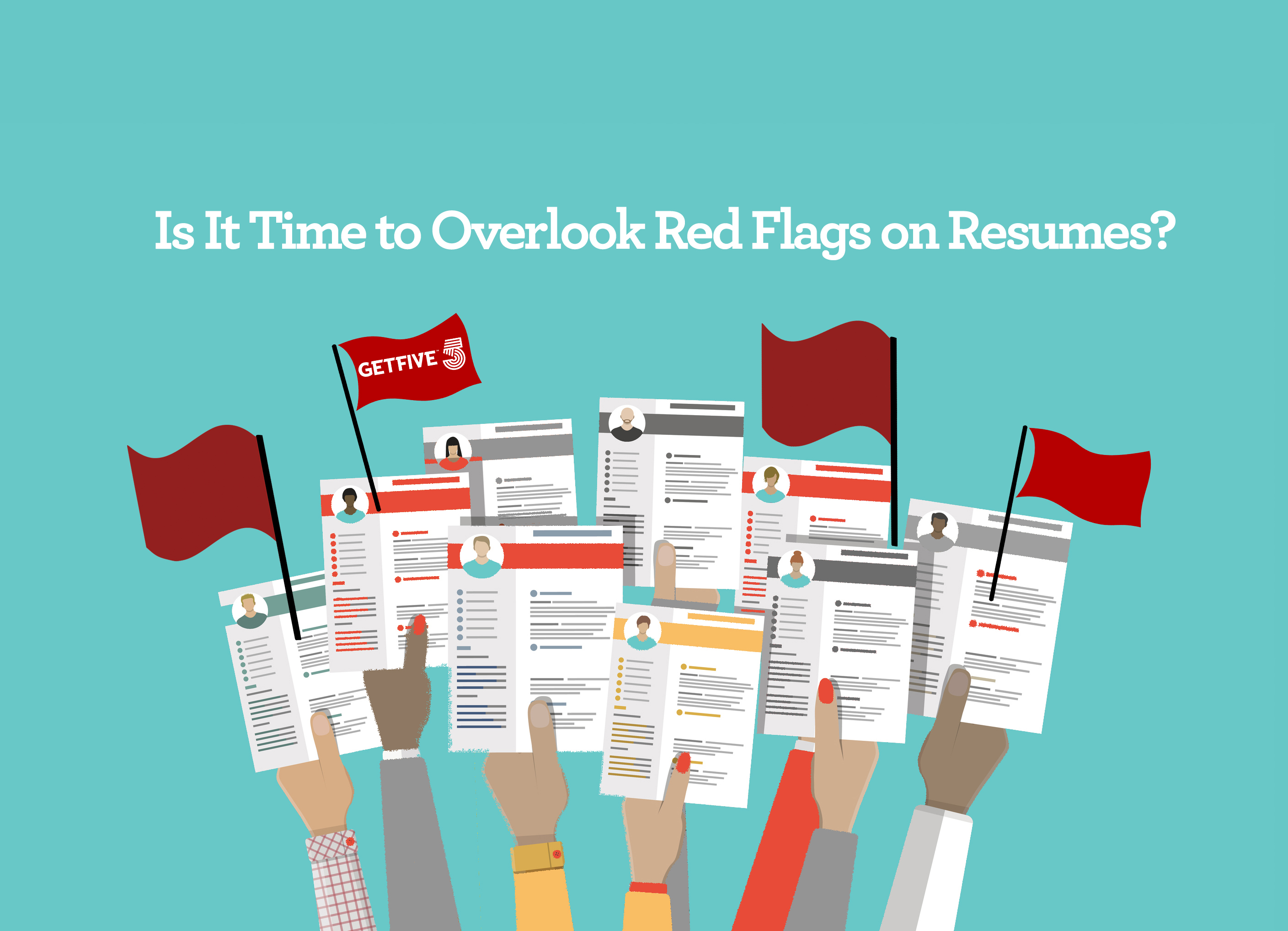 There’s more to this tight job market than diva demands from candidates who know they’ve got plenty of room to bargain for things like sky-high pay and vacation time and endless perks. The labor shortage is causing recruiters, hiring managers, and other HR types to cast a wider net than ever before, considering people who previously wouldn’t have made the cut because of some common red flags.

Here are some of those red flags people are reconsidering and why we think it’s a good thing.

Does the position really require a four-year college degree or is that just a standard requirement you’ve had in job postings forever? Do you really need someone with X years of experience for a job you can train them to do? Reconsidering those arbitrary requirements will cause you to rethink your real needs and find candidates with the traits, not just the education and experience, necessary to do the job. This is especially true for companies that use hiring technology to weed out candidates based on whether their resumes meet certain criteria. Rolling back those requirements will give you a richer pool of applicants.

If you’ve been disqualifying candidates who haven’t stuck it out at their last employer for whatever your desired number of years is (two or three, say), it’s time to rethink this as well. Millennials and younger workers simply don’t stay put like their older counterparts. Job hopping is becoming a more accepted way to climb the corporate ladder.

Gaps in employment and backsliding

If someone has been out of work awhile, it used to be an automatic red flag. Why couldn’t they find a job? But now, people are taking time off to raise their young families or care for elderly parents. Employment gaps are much more common. Same thing goes for obvious regressions in employment status, going down the ladder instead of up. Work-life balance is more important than ever, and good people are deciding that working an 80-hour week just isn’t cutting it anymore. So what may look like a demotion on a resume shouldn’t be cause for concern. It might just be that person needed to breathe a little more.

If your state hasn’t already outlawed asking people about their criminal histories, it’s coming, so we suggest dropping those questions from your job application now in prep. Some employers might be a little queasy about hiring someone who may have a criminal record, but there are definite advantages to hiring ex-cons, even ex-felons. Studies have shown that when ex-cons get hired by an employer willing to take a chance on them, they are fiercely loyal and give 100 percent to the job. And, as strange as it is to say it, being a drug dealer equips a person with a leadership skill set that your average mid-manager doesn’t have, according to Defy Ventures, a nonprofit that gives drug dealers and former gang leaders the legitimate business skills needed to transform their lives. Ex-cons, when given a chance, can be your star employees.

All of that said, some red flags should keep on waving. Crimes involving money, and crimes of a sexual nature, along with previous restraining orders, should give you pause. Ditto for someone with proven obsessive behavior like stalking, or a violent, abusive past. The old standbys like errors on resumes, badmouthing past employers, being late to interviews, and failing drug tests are as relevant as they ever were, as is lying on a resume. Being racist or otherwise obnoxious on social media is another red flag. You don’t want to tarnish your company’s brand by hiring a jerk.

Bottom line, you’ve got your own line in the sand when it comes to job applicants. It’s up to you whether this tight job market causes you to re-draw it.