Getting Down to Ground Level with Job Hunter Diane Paoletta

It’s one thing to hold a high-level job, and it’s an entirely different matter to look for one. You might assume the skills are the same, but Diane Paoletta, a marketing executive with 25 years of experience, found she had some things to learn when she came to GetFive. At the 60th HR Network Breakfast Seminar on January 31, she shared the highlights of her experience on the way to her new position as Marketing Director for the New York office of one of the nation’s top 10 accounting firms.

“You’ve got to put some stakes in the ground,” she explained. “Otherwise, you’re dealing with just a massive business community”

Diane’s first task – as it is for most job-seekers – was to define her targets. She had spent the past 11 years in marketing for accounting firms, which fell under the broader category of  professional services. Law firms, also in that category, could provide additional opportunities in marketing, but after considering this, Diane decided to stay within her industry of accounting.

“You’ve got to put some stakes in the ground,” she explained. “Otherwise, you’re dealing with just a massive business community, and it’s really hard to navigate through that.” GetFive provided the structure Diane needed to really search properly, “going from that 50,000-foot level of an industry perspective and getting down to ground level, where I started to really make connections,” she said. “That was a key thing for me.”

Her next lesson was in networking. “As a Director of Marketing, I was meeting with managers, but they’re not going to hire me,” she said. “I had to bring it up to a higher level to get noticed.” The process was also far more intensive than she had originally assumed. “I thought I was networking until I realized that you’ve got to be out there several times a week, every single week – doing things, meeting people, following up. There were a lot of research calls and informational interviews, asking what do you do and who do you know? Getting to know a lot of people.”

“I thought I was networking until I realized that you’ve got to be out there several times a week, every single week.”

Win Sheffield, Diane’s coach (and a contributor to GetFive’s newest book, WorkSmarts: Be a Winner on the Job) confirmed what she suspected: answering ads was a huge waste of time. “You naturally think that’s what you’re going to be doing,” said Diane. “I didn’t want to be doing it, but I felt compelled, because there’s this job, you know? But it was such a black hole. So I stopped.”

She was consistent in her job search, attending 12 weekly small-group strategy sessions. After a summer of intensive networking, Diane received three promising leads in September. “All of a sudden, it was like the payoff; in one week, I had three interviews!” she laughed.

Perhaps the greatest benefit of GetFive, according to Diane, is the camaraderie. 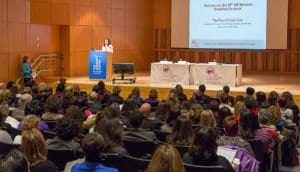 The lead for her current job came from “somebody in my industry, not a coworker, but someone who used to be a Marketing Director for another accounting firm,” Diane explained. “She had left her company and was looking for something totally different. She said, ‘This is the firm I used to work for years ago; they’ve expanded and are looking for somebody more high-level like yourself.’ I never even saw that!”

Perhaps the greatest benefit of GetFive, according to Diane, is the camaraderie. “Having most of the same people there with you, hearing your story every week and supporting you, was invaluable. I will tell you, it was very difficult to keep moving for those 12 weeks. But with the group, it was certainly possible.” She said she still has friends from the group and continues to network with them.

“Diane really buoyed up the other people in the group,” said Sheffield. “Everyone comes with an attitude of helping each other, and that really makes it work. Diane looked at networking, broke it down, and figured out how to move things up to the next level. By doing that, she showed the other members of the group how to do it.”

Diane is delighted to be involved in a new department again, while remaining in her industry. She has also (not surprisingly) recommended GetFive to a number of people. “It was a wonderful experience, and I thank all of you!”

Jane Rubinsky, a journalist and writer/editor for non-profits and businesses, is a GetFive member.

Rickey Allen
Like what you were reading? We’ve got a lot more to share!Click here to check out other HROI articles and interviews.
Follow

Reskilling and Continuous Learning at Mastercard

Jobs of the future: Upskilling predictions from McKinsey