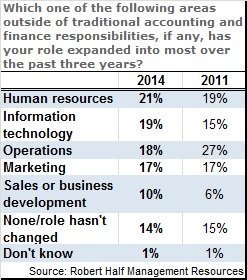 CFOs are becoming more involved in human resources issues, as companies more and more break down traditional silos in favor of ever greater collaboration among departments and divisions.

Better than 8 in 10 CFOs say their responsibilities have expanded in the last three years to touch areas as diverse as marketing and operations. Human resources leads the list, with 21 percent of the 2,100 CFOs surveyed saying their job now includes at least some involvement with HR issues. Following closely, 19 percent of CFOs reported having some responsibility for IT.

Robert Half Management Resources, which commissioned the recent survey, did a similar one in 2011. That year, just as the economy was starting to revive, operations was cited by more CFOs (27 percent) than any other area. Human resources trailed with 19 percent of CFOs referencing greater involvement there.

What’s happening, says Paul McDonald, senior executive director for Robert Half, is that “CFOs are becoming more involved” in all areas of a company. The “blurring of functional areas is better than ever,” he said. “Everyone is involved in a collaborative mode.”

This is especially true in HR where, McDonald points out, predictive analytics — dependent on data analytics — are becoming a critical part of recruiting and hiring. “It’s a more complicated world,” he observes. Navigating it requires talents from wherever in a company they maybe found.

However, involvement doesn’t mean management, McDonald explained. That CFOs are finding their role expanding doesn’t mean a return to the reporting structure of years ago where IT and personnel were functions of the finance division.

Instead, the new importance of data to business and post-Recession corporate frugality have demanded that CFOs be involved in most strategic decisions.

“Big data is pushing the change,” says McDonald. Finance has a long track record analyzing data, so its expertise is called on by other departments with less understanding of how to gather, manage, and analyze numbers.

Likewise, companies are demanding that projects, especially those carrying a price tag, show a return. That’s where CFOs come in. “ROI,” says McDonald, “is being used (to examine) everything an organization is involved in.”

John Zappe is a contributing editor for ERE Media, Inc. This article originally appeared on ere.net and is reprinted with permission.

Jane Rubinsky
Like what you were reading? We’ve got a lot more to share!Click here to check out other HROI articles and interviews.
Linkedin0Facebook0Twitter0Email0
X